5 ways to inflate your social share numbers. How far would you go?

Those numbers you see next to social share buttons in news articles and blog posts? They’re misleading at best, and grossly inflated at worst. Here’s their dirty little secret.

When I land on a news article or blog post with social share counters, my first impressions are invariably influenced by the numbers. If the post has been liked, tweeted or shared less than, say, 5 or 10 times, I (like you, probably) am more likely to leave the page sooner.

A page with hundreds or thousands of shares, on the other hand, might hook my attention long enough to digest the gist of the content, at the very least. So those higher share numbers buy more of my time.

(Sometimes, of course, I’ll stumble upon content that no-one’s shared but that turns out to be great. I love it when that happens).

I’m pretty sure I’m not alone in being influenced by social share counters. Which makes the business of inflating the numbers a lucrative one for many online marketers, social ninja-gurus and SEO consultants. I’m talking here about the numbers themselves, rather than the reach and engagement they (purport to) represent.

Since the numbers in those counters are social interactions rather than just shares/tweets, you can inflate them pretty easily. What’s more, if you delete the interactions afterward, in most cases the numbers remain intact.

If you’re a blog/news site publisher with social share counters, here’s what to do. Once you’ve published a new post, select any of the following options. Go as far down the list as your time, patience and scruples allow. 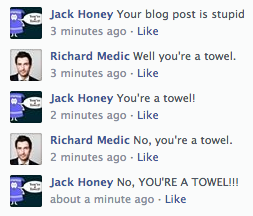 Every comment under your posted link counts as an interaction, regardless of how many commenters there are (or aren’t). So a 30-minute argument on Facebook can yield 200 interactions.

4. Set up a Gmail and use it to create alias social accounts.

5. Hire an unscrupulous developer to hack your social share buttons

This way you can set the counters to start at, say, 20k instead of 0. I’m not a tech geek but I assume this is possible. If you don’t mind discrediting your post, website and reputation, that’s an impressive 20,000 interactions for every social counter.

Numbers matter, because first impressions matter. Now that you’re aware of your options, where will you draw the line?

Richard Medic is founder of Happeningo.com and Soonfeed.