“Beforetime” is to realtime what foreplay is to sex. So why are you ignoring it?

This article was published by Netocratic in two parts, on 5 March and 12 March 2013. I’ve made some minor changes in combining the two texts. 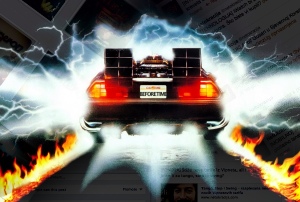 The marketing gurus and social media ninjas have spoken. We should be telling stories in real-time. Get your content out there as it happens and, the thinking goes, you’ll be rewarded with followers and engagement. But is this fixation with real-time communication eroding the art of storytelling and selling your content short?

This is the first in a two-part “beforetime” special.

Think about how you share content in real-time. Let’s say you’re a music blogger who live streams the opening song of every gig you attend. It’s Monday and you’ve just bought a ticket for a live show happening Friday night. You tweet the good news and share a photo of your goofy face with the ticket between your teeth. You’re excited.

Friday night comes, you’ve elbowed your way to the front of the crowd and you raise your iPhone high in the air. Look at you, streaming the opening song in real-time for your blog fans! But how many of us actually saw your live stream in real-time? My bet is not many, if any of us. That’s because, apart from Monday’s tweet and goofy photo, you all but ignored the “beforetime”.

You might be an activist photographer capturing images at a street demonstration and sharing them on Instagram or Flickr. Or an SEO agency hosting a live Google+ Hangout to engage with leads. Or an excitable geek live tweeting from a tech event. No matter what you’re communicating in real-time, it’s likely but a glimpse of a more compelling story, one that started beforetime.

Beforetime is the minutes, hours, days or even months before your real-time moment happens. It’s the backstory that hooks your audience into an emotional connection with your content. It’s the space where curiosity, anticipation and excitement can ignite the conversation earlier. And it’s the elastic that extends the lifespan (and SEO) of your real-time content, so it’s discoverable before it happens and sticks around in search after it happens.

Since the most compelling stories include the five Cs (context, challenge, conflict, climax and change), beforetime is also the context, challenge and conflict that precedes your real-time “climax”. And yet most communicators invest all their energies in delivering a climax bereft of the story that got us there. While sex without foreplay has its spontaneous charms, you wouldn’t ditch the foreplay every single time now would you?

That’s right: beforetime is to real-time what foreplay is to sex.

So how can beforetime attract new audiences and deepen engagement around your content? In Part 2 you’ll discover how to make beforetime work for you. I’ll even be there when the article goes online, if you have any questions.

You might be a music blogger live streaming a gig, an activist live blogging photos from a demonstration, a business hosting a Google+ Hangout, or a geek live tweeting from a tech event. If you know you’ll be communicating something in real-time, then you can build a story around it beforetime.

Not all real-time moments can be foreseen. But once you start thinking about your sharing habits you’ll be amazed at how often and how early you can predict what, where and when you’ll be communicating in real-time. Of course you might not yet know the start time of your real-time moment, but that’s OK. The point is to kick off your story early by pushing intent into action now.

Every story needs a space to grow. Your real-time communication will be happening online somewhere, so that same web page can also be your beforetime page as long as the URL is active. If you’re live streaming a gig, it might be your channel or event page. For scheduled live tweets it can be the search feed of a unique hashtag. For a hangout, a Google+ Event page. And if you don’t have a landing page yet, simply add your future real-time happening to Soonfeed (where I’m founder and chief of happenings), so your audience can get an alert as it starts. As long as it’s shareable and can host a conversation, it can be a beforetime story page.

Building a compelling beforetime story around future real-time content isn’t a given. But if you’re passionate about your content, a story will emerge. Just keep in mind the 5Cs that most good stories have in common: context, challenge, crisis, climax and change.

In Part 1 I introduced a music blogger who live streams from his iPhone the first song of every gig he attends, and who’s bought a ticket on Monday to a gig happening Friday. Our hero has 5 days to build a story around his climax, a live stream of the band’s first song. Let’s say the band is touring to promote a new album and this is their third trip to the city (there’s your context). The ticket was expensive and our hero had been planning to go on a date Friday night (a challenge). He nevertheless bought the tickets with his rent money and then cancelled his hot date (crisis!).

Throughout the week our hero has been telling his story on a beforetime page (his blog) and across the social networks. His audience has responded with opinions on the band’s new album, complaints about the high cost of concert tickets and requests that he share a photo of that hot date he ditched. Friday’s real-time stream has become important to us. We don’t want to miss the climax to his story.

If you’re planning to communicate in real-time and want to start the beforetime early, simply divide your content into two (or more) parts so that Part 1 establishes enough context to generate interest in your final part climax. If you’re reading Part 2 of my article, for instance, chances are it was because you come across Part 1 first. You might have seen it on Netocratic, Soonfeed or one of the social networks and thought it would be worth checking out the climax. So even if you didn’t realise it until now, dear reader, you were part of the foreplay beforetime that made this climax that little bit special.