How to host a live chat without the trolls, spam and negativity

This month we created a happening online for EPALE, Europe’s new community of adult learning professionals. It was a live, 10-minute Q&A at EPALE’s launch conference in Brussels. The event landing page hosted the live stream and Twitter feed (#epale2015) that together brought the happening online.

The live stream gathered 5,300 viewers throughout the day, which is way more than most comparable EU events. And the hashtag trended in Belgium without a single negative or spammy tweet in the #epale2015 search feed. How did we do it? 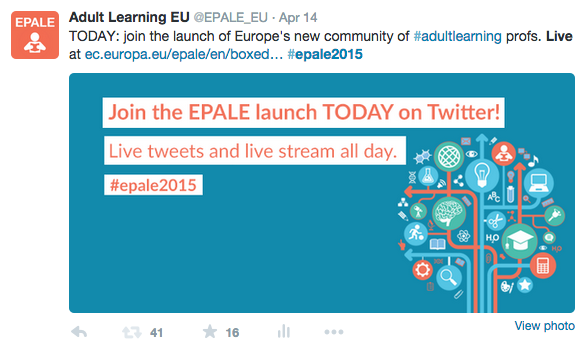 European Commission officials get nervous before big project launches. Europeans want more bang for their buck these days and projects need to perform. So a bad launch event would be like biting someone’s lips by accident the first time you kiss — you’d be forgotten but never forgiven.

When I proposed a live, 10-minute Q&A during the launch event, our client was justifiably ambivalent. But I’ve been working with EPALE for some months now. They knew me well enough to be sure enough we wouldn’t fuck it up. So the proposal was accepted.

There are several options when hosting a live Q&A, and each carries with it some degree of risk. Trolls, spam or negative sentiment can turn a chat session into a street brawl of 140-character jabs. Just ask the European Commission’s social media teams, whose chats are regularly trolled by eurosceptics.

For our Q&A, anyone on Twitter or Facebook could pose a question about EPALE to the event speakers beforetime. This was a much safer option than my usual preference: a reverse Q&A where we pose a provocative question to the online community in realtime.

Why is the first option safer? Because when you ask the community a question, you open yourself up to prickly responses that can spiral out of control. Invite the community to do the asking, however, and most of the questions will be bland enough to bring tears to your eyes. Which is exactly what we wanted, as it’s much easier to heat up a live Q&A than to cool it down. That’s a lesson I learned from this Twitter chat with singer and misogynist Robin Thicke.

As the response to such an open-ended invitation was (predictably) poor, we asked our multipliers, colleagues and friends to get the ball rolling with their own questions. Within a couple of days we had enough questions to select 10 good ones, and could then shift our resources to marketing the happening itself.

The day before the launch, we took screen shots of the questions as they appeared on Twitter and Facebook, and drafted simple tweets for each (“LIVE: question from @EvaPale #epale2015”). We saved the posts in Buffer to make it easier to tweet on the day.

We set up an onsite Twitter wall to display only the Qs and As for the 10-minute happening, so the display wouldn’t be cluttered with random #epale2015 tweets.

On the day, we connected each of the 10 questions with the speaker or attendee we thought was best placed to answer it. We asked them to provide us with a concise answer that we could tweet as they responded live during the happening. Thus the happening “flow” was:

1. Question appears on the Twitter wall and online via #epale2015

2. I read the question on stage and invite answers from the onsite audience

3. The identified speaker raises her hand and offers an answer that also appears on the Twitter wall.

And so on for 10 questions, at the rate of one Q&A per minute, for a total of 10 minutes. Long enough to engage the community but short enough to avoid critics, trolls and spammers.

The only two hitches were: 1. heavy WIFI traffic slowed down our Twitter wall flow, and 2. one of the speakers didn’t hear the question meant for him, which caused some (onsite) awkwardness while another attendee mustered the courage to answer.

Although we’d prepared every element of the Q&A beforetime, this was still a “live chat”. Think of it as a live theatre performance with a cast and script. The tighter the script, the less breathing room there is for anything unexpected to happen. It’s still “live”, and some realtime interaction is inevitable (and indeed preferable), but the risks are substantially mitigated.

When we bring happenings online for clients who want to minimise the risk of trolling and negative sentiment, we approach it like a live theatre performance. So if you’re losing sleep over your next live chat, get out of bed and start scripting it now.

Richard Medic is chief of happenings at happeningo digital agency and founder of Soonfeed.