How we brought the No Pants Subway Ride to Brussels

It all started six days before the happening, with this email to colleagues at Betacowork.

The first responders were Lucas and Manuel (“me + my hairy ass are in”), while Pascal offered to co-organise the happening onsite. 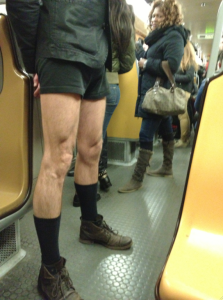 And thus what began as an idea floated among coworkers evolved into a party of 400+ people, sans pants, wandering the metro lines and streets of Brussels.

That’s me in the black undies. Scroll down for the live Instagrams, which turned out great.

We wanted the No Pants Subway Ride in Brussels to show that any moment–even one happening underground–can be brought online in realtime. I know only too well the challenges of using 3G mobile networks for happenings online, so the planning needed to be meticulous.

The happening was to be hosted on Soonfeed’s Facebook page and feature a combination of live streams and Instagrams pushed out from our phones. We’d beef up the social stream by curating content that others were posting with the #NPSRBXL hashtag on Facebook and Twitter.

We tested the 3G network along the metro route and at every metro station. Twice. Our two interns in Bosnia were to help curate content from the relative stability of their cable internet. And we practiced sharing Instagrams with pasted hashtags and captions, quickly and in realtime, over and over again.

What could possibly go wrong?

Too many people joining the happening online, that’s what. The Facebook event page had reached over 7,000 people (with more than 700 “Going”) and Belgium’s national media had been reporting the story for days.

The Soonfeed server just couldn’t cope with the influx of traffic once the email alerts started going out. Almost 5,000 people waited on their computers or mobiles for an alert that never arrived. Meanwhile, the online happening was unfolding on our Facebook page, witnessed only by the few hardy souls who’d actively searched for it.

And yet, although those 60 minutes of realtime were a technical fail, the happening itself was not. The lifespan of an online happening typically involves three phases: beforetime, realtime and aftertime. But not every happening relies on all three to succeed. Take Beyonce’s surprise album launch, which dispensed with beforetime altogether. Her happening was so special because–not in spite–of it starting at the moment the album was launched.

So putting aside the fact that many of our Soonfeed users were pissed because they didn’t get an alert (I’m really sorry for that), our No Pants mission showed that live happenings online aren’t just about the realtime. We may not have succeeded in bringing an online crowd there as it happened, but we did bring them there beforetime and aftertime. We also ended up with a nice little Facebook community.

Best of all, hundreds of us had some fun on a (rare, too rare) sunny Sunday afternoon in Brussels.

As with every Soonfeed happening, there were lessons. Here are three.

1. While plenty of people were sharing content in realtime, most of them weren’t using the happening hashtag. Next time we’ll be shouting the hashtag from the rooftops, over and over again. And we’ll probably use #NPSR #Brussels rather than #NPSRBXL.

2. To avoid the limitations of hosting a happening on a Facebook page (or, for that matter, on any one social network–you can’t view Instagrams in Twitter timelines, just as you can’t view Vines in Facebook’s newsfeed. The ravages of startup acquisitions.), we’ll customise a happening landing page based on social hashtag APIs, one that brings the conversation together on a single page.

3. We’ll make damn sure the server can handle the traffic.

The No Pants Subway Ride is an annual global event started by Improv Everywhere in New York in 2002. We thought it was about time the Ride came to Brussels, so we could experiment with bringing it online in realtime. Here’s the Brussels Ride Facebook Page.

A big thanks to STIB and the local police for their understanding.

Richard Medic blogs and consults at Happeningo.com. He’s also founder and chief of happenings at Soonfeed.