Mostar old bridge diving, brought to you by an Iphone

This article was published by Netocratic on 23 July 2013, a few days before the Mostar Old Bridge diving competition in Bosnia-Herzegovina. This was the first in my “Truth or Dare” series of experimental happenings. 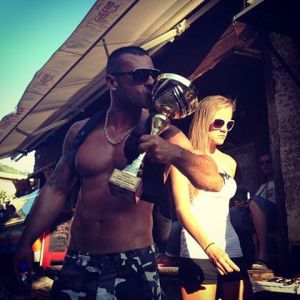 Lorens Listo always wins the Mostar dives. That’s why the girl is looking straight ahead.

Whether you’re a spectator, competitor or organiser, turn an extreme sporting event into a live “happening online” with just a phone, a story and a vantage point.

Your first jump from the Mostar Old Bridge is called a “liberation“. I guess from fear. And indeed my first jump in 2007 was as scary as it was liberating. A few months later I was to step off the bridge again, this time for a PR stunt during Mostar’s annual diving competition. That “happening“ set a new world record for the most people chanting the word “subsidiarity“. It’s not easy promoting a 6-syllable word, you know.

This Sunday, I’ll be returning to the bridge for the 447th edition of the competition. But this time I’ll be staying dry, perched atop the bridge with my iPhone, bringing the happening online.

Extreme sports such as rock climbing, BASE jumping and high-diving make for compelling live content. That’s because they’re so damn visual. And because the very definition of an extreme sport foresees death as the most likely outcome of a mismanaged accident or mistake. We humans are morbid creatures, especially when it’s happening live.

How can you turn an extreme sporting event into a live happening online your friends, followers, community or customers wouldn’t want to miss? By creating a live content feed lasting 15 to 60 minutes, since that’s the length of time you’ll generate the most traffic and engagement. This is especially true of social content. So here are your three ingredients for turning  extreme sports into live happenings online.

Every happening tells a story. And every such story needs a context, characters and a crescendothat’s packaged into content and begins “beforetime“. Beforetime is that window of opportunity between your intention to create a happening and the live moment itself. Marketers call it marketing an event. I call it telling a story beforetime. If the sporting event you’re bringing online is happening next month, start talking about it now.

Talk about the context. The Mostar dives offer plenty of that. So I’ll be telling a story of a bridge and diving tradition that’s almost 500 years old. I’ll talk about how teenage boys practice on the nearby cliffs and how someone dies almost every year jumping from the bridge. And if I wanted to court controversy, I could talk about the bombing of the bridge during the war (I won’t, as that’s a lame way to generate traffic).

Talk about the characters. There are plenty of those, too. The six-time competition winner and local favourite (Lorens Listo). The old legend and now judge (Emir Balic). The souvenir shop vendor in white robes and hat who does handstands on the bridge when he’s bored (Safa).

Your live happening is your crescendo. For me that begins with the first finalist’s dive and ends with the judges’ final scores, a total of 30 minutes tops. Like I said, the optimal length of time for a happening online is more than 15 minutes but less than one hour.

Content is, and always will be, King. So apart from your live happening content, be sure to create and/or curate content that tells a story beforetime. Collect, create and share images, videos, memes, infographics, music etc. to communicate the context, characters and crescendo. Post some of that content on blogs, forums and social pages to engage with communities (but make it useful, not spammy). Send a golden paragraph about your happening to an extreme sports journalist. Write a story for Netocratic. And don’t forget to send regular reminders about when (day, time) and where (URL) your happening is taking place. Or just add it to Soonfeed.

It’s true. That thing in your pocket can turn extreme sporting events into live happenings online. Here are some options.

Extreme sports can be tough to capture online. They often happen in inhospitable locations that lack WIFI or 3G networks, while the sports themselves might involve long distances or activities that are difficult to capture with your phone. So keep in mind:

Now you’re ready to turn the next extreme sporting event you attend, compete in or organise into a live happening online. Do it consistently, do it well, and you just might find a Red Bull marketing manager knocking on your digital door.