“Twitter is a wonderful thing for me,” said Donald Trump the other day, “because I get the word out.” 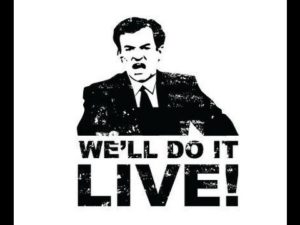 And not only that. The US President can broadcast any message to the world whenever he likes, even live tweet his own impeachment, then put down his phone and let the ensuing shit storm play out without him. As he never sticks around to take questions from his Twitter followers, he subverts an otherwise social network into a one-directional, 20th Century style bully pulpit. I call the tactic “tweet and run”.

Trump’s rhetoric has emboldened political bloggers, conspiracy theorists and savvy teenagers to peddle the kind of stories we used to laugh at in The Onion. “Fake news” (not to be confused with “FAKE NEWS!”, the President’s term for news he doesn’t like) isn’t a joke anymore. It’s bad for democracy, business and our 21st Century souls. So how do we kill it?

In 1933 the man who coined the term “bully pulpit”, US President Franklin D. Roosevelt, broadcast on national radio the first in a series of “fireside chats”. For the next decade, FDR’s soothing narrative helped to unite and reassure the American people during the recession and World War II.

The thing is, these radio broadcasts weren’t actually live “chats” so much as scripted monologues designed to counter the hostile newspapers controlled by Roosevelt’s opponents. FDR’s press secretary, talking about the value of radio, said “It cannot misrepresent or misquote. It is far reaching and simultaneous in releasing messages”. Sound familiar?

FDR knew it. Winston Churchill and Joseph Goebbels knew it. The “First TV President” John F Kennedy knew it too. The most effective way to control the news was to communicate directly to a mass audience in a live radio or TV broadcast. No press release, radio jingle or propaganda film could compete with the authority and trust radiated by a live simulcast, even if it was tightly scripted or pre-recorded. A live crowd makes narratives appear more trustworthy, regardless of how “live” the actual content is.

Until the late 20th century live broadcasting was a relatively low risk, high return strategy. Charismatic leaders could say pretty much anything, even hire a stand in, and get away with it. Then talkback radio and TV studio audiences and live cable news came along. Opponents and sceptics and ordinary people began to challenge stories in realtime. And as live content migrated online in the 1990s and the US elected its “First Social Media President” in 2008, live broadcasting became unavoidably interactive and risky.

That’s why authoritarian leaders like Trump, Putin, Jong-un, Erdogan and Kaczyński don’t host live town hall meetings on Facebook or AMA live chats on reddit (Obama crashed the servers in 2012). Pre-president Trump dipped his toes in a live tweet chat once (#AskTrump, 2015) but they came out roasted. He’s avoided “real live” ever since. The Facebook Live Weekly Address he’s dragged in to read every couple of weeks is just a one-way broadcast, much like FDR’s fireside chats.

Fake news stories gain traction before most of us realise it’s happening. Once a story is seeded on a political blog, conspiracy site, TV talk show or whatever, an army of Twitter bots, fake Facebook profiles and discussion forum aliases share the misleading headline among partisan communities and influencers. A coordinated campaign can reach millions across multiple networks in a few minutes. Eventually a mainstream site picks it up or (the Holy Grail) a president tweets it. The details of the story don’t matter, as long as there’s a “truthiness” to the narrative that confirms our biases.

For organisations, movements and individuals alike, the simplest way to stop fake news is to gather a crowd before the story spreads. If truth seekers are there to question, call out and ridicule a story early on, it’s more likely to fizzle before reaching critical mass. Tell the truth early and tell it often. As Goebbels would have said had he been an honest propagandist, “If you tell the same truth enough times, people will believe it.”

If you’d like to help stop fake news before it spreads, we’re working on a Soonfeed for people like you. We make and break stories beforetime, so you can catch the truth before it’s misunderstood, ignored or hijacked by others.