The 10 Greatest Happenings Online of 2013

Yes, if this were a list of the most talked about, viewed or influential happenings on the web this year. But it’s not. Greatness is in the eye of the beholder, so for every one of us, the greatest happenings are those we’re personally glad to have witnessed or pissed to have missed.

As it’s part of my job to know what’s happening online soon, I’ve been more privileged than pissed this year. So here they are, The 10 Greatest Happenings Online of 2013, in no
particular order, out of the eye of this beholder.

Beyonce launches an album by stealth

While I’m no fan of her music, this was genius. No drip marketing, cryptic ads or PR stunts. Just a 15-second Instagram to announce her album was “available now” on iTunes. If beforetime marketing is like foreplay before sex, Beyonce’s happening was the equivalent of a quickie in the back seat of a taxi on the way to church. This sparkly map gives you an idea of what happened next.

I’m hoping the folks at Chatroulette sent Steve Kardynal a Christmas present this year. He’s probably the only reason they’re still in business. I once trawled Chatroulette in the hope that Steve might appear on my screen in all his hairy, manic glory. Alas, it’s just the usual parade of wankers and crankers.

I see my unborn daughter for the first time

No, I won’t be posting this or any other image of my child without her permission. I wonder how many years that will take.

Breaking Bad is my fave TV show ever, and I never say “ever” unless I really mean it. So the social media frenzy around the show’s finale is one happening I’m pissed to have missed. I’ve just started watching the final season and wanted to avoid spoilers. The 60-minute happening generated over 300k tweets, smashing all records for a TV show finale.

Twitter chats can be risky. Just ask the EU institutions. So when alleged paedo R. Kelly decided to promote his new album with a Q&A on Twitter, a hashmob happening was inevitable. There’s a fine line between a spontaneous gathering of ill-meaning trolls and a well-deserved comeuppance. This was the latter.

Clearly I’m glad this happened. You and I wouldn’t have met here otherwise.

Alongside Louis C.K., Ricky Gervais is one of my two fave comedians. And while Redditors are often labelled childish, cliquey and crass, this happening proves that Reddit’s Ask Me Anything live chats are home to some of the most touching, enlightening and funny as hell happenings on the web. 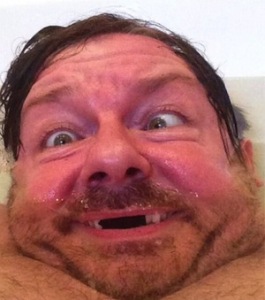 Ricky proved his identity to Redditors with this touching photo.

Safa does a handstand at the Old Bridge

Safa is 71 years old. For decades, he’s run a little souvenir shop next to the Mostar Old Bridge. He reckons this summer was his last. I’d just finished live Instagramming the bridge diving competition when he offered me a farewell handstand, so this was a realtime moment only a few people witnessed. That’s what made this one great.

Elan exchanges notes with Diane in 7A

It’s because it turned out to be a hoax that makes this happening great. But I missed it. Elan Gale hadn’t added it first to Soonfeed.

I sent the lady a glass of wine and a note pic.twitter.com/GttnmQI25P

I really wanted to include a Google+ Hangout on Air, but while plenty of hangouts in 2013 were good, I’m yet to experience one that’s truly great. Still, Google+ deserves a mention for the collective weight of its hangouts this year. And for taking me away from Facebook. And for the Google Glass happenings that will be on this list in future years.

And I just realised…

Despite the evolution of YouTube.com/Live and live streaming generally, I didn’t include a single live video stream on the list (although these bears catching salmon came close). Who would have thought?

Thanks for visiting my blog. May your 2014 be full of the moments dreams are made of.