This is the story of how my midlife crisis spawned a strange little tune called The Europe Song.

×
Update Required To play the media you will need to either update your browser to a recent version or update your Flash plugin.

I composed The Europe Song in three parts (Side A, B and C) to offer each a life of its own. The audio stems are free to use with attribution (#TheEuropeSong).* If you’re wondering WTF, there’s a Q&A below, and this interview with me on TV.

[APRIL 2017] Here’s the original “Various Europeans” version we produced for the EU Tube channel. We filmed in Barcelona, Brussels and Warsaw. That’s my big nose in the tram stop scene.

[AUGUST 2017] Due to production constraints, we shot most of the video in the shitty light of a European winter. The project needed some sun. So one summer’s morning in Mostar, we got up early to shoot this one-track version of The Europe Song (Side B). We’d recorded the music a year earlier down the road.

[APRIL 2018] To celebrate the first anniversary of The Europe Song launch, I sent the 60 audio stems from the original recording to electronic musician and artist Andri Soren Haflidason. Below is what he sent back.

There are 12 stars in the video.

There are 12 kids singing in this version.

There are 12 stars in the European Union flag.

There are 12 words in the song. They’re all made up.

The original plan was to launch the music video on 12.12 last year.

The last 12 notes are Beethoven’s Ode to Joy (you’ll hear it now you know it’s there).

Answers to your questions

It’s a tune I started writing in my Melbourne bedroom in 1992 and had forgotten about until early 2016. That’s when I was approached by the European Commission to create something that reflects a “new narrative for Europe”. I figured a song might touch some Europeans who otherwise have no interest in the EU, so I finished writing the tune 25 years after starting it. Robert Schuman, “Father of Europe”, said “the European spirit signifies being conscious of belonging to a cultural family”. Producing The Europe Song made me feel like I’m part of some big and strange and curiously comforting family.

What language are they singing in?

It’s what my Brussels-born daughter was speaking last year when she was two years old. A hybrid of half-formed words in French, Polish, English and Gibberish. I’ve been told the words sound a bit “eastern” but that’s because the original version was recorded with local singers in Mostar, Bosnia-Herzegovina. Phonetically the lyrics reflect the language families of north, south, east and west Europe. It should feel natural singing The Europe Song no matter where you’re from or which language/s you speak. 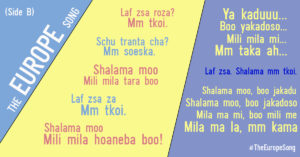 What was your motivation for recording the song?

I feel European and I’m going through a midlife crisis.

What does your midlife crisis have to do with anything?

I stopped writing songs two decades ago (apart from this little ditty for my daughter’s first birthday). My midlife crisis started a year ago, when my daughter found a cassette tape in an old cardboard box. On it was the forgotten tune I’d named, for no particular reason, “Catch of the Day”.

My original 4-track cassette recording of the tune that eventually became #TheEuropeSong. Be there when it goes live https://t.co/whpmNZ7aIi pic.twitter.com/0K6d5hCcbr

How did you turn that strange little recording into The Europe Song?

I finished writing the song in Mostar and recorded it at Studio Baraka, which is run by Atilla from Zoster (Mario is one of our singers, Goran built the beats). The town is also home to Mostar Sevdah Reunion, the Pavarotti Centre and the Mostar Rock School. So I had the privilege of working with some of the finest musicians and singers in SE Europe (including 12 kids), most of them based within a two minute walk from the recording studio. The song was mixed and mastered in Cologne by Klaas, who’s best known for his EDM mixes. I asked him for a sound that feels like it was recorded in 2022 by a time traveller from 1992.

Who owns the publication rights to the song?*

The Europe Song is owned by everyone. The composition was my gift to the European Union since they kindly agreed to set it free upon publication. I designed the music as three “sides”. Each has a distinct tempo (104, 110, 116 bpm) and feel to it. Anyone can sing, play, butcher, remix or sample the music and lyrics as long as it’s not to sell washing powder or something (with hashtag attribution #TheEuropeSong, CC BY-NC). Send me a message and I’ll give you 60 audio stems to play with.