Why would 300 million otherwise reasonable people (this one included) watch a live stream of eagles nesting?

Atop a Cottonwood tree in the town of Decorah, Iowa, a family of bald eagles is nesting. The parents take turns catching prey, feeding their eaglets and keeping them warm. The siblings bond and squabble. It’s a series of daily rituals and occasional dramas typical of families everywhere. 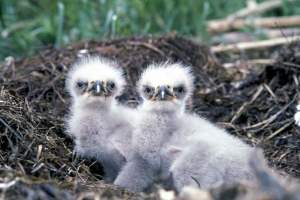 300 million reasons to be a Bald Eagle chick

Only this is no typical family. The Decorah Eagles “nest cam” is the most watched live stream channel of all time, spawning a sliver under 300 million live views (298,652,320 at time of writing), mainstream media coverage and eagle-watching communities worldwide.

The limbic system is a part of the brain that drives our emotions. When we’re around other people–especially crowds–the limbic system releases neurochemicals that connect us at an emotional level. The capacity for empathy and non-verbal communication is called limbic resonance aka “emotional contagion”.

Limbic resonance is why people line up for the new iPhone instead of buying it online, why men become football hooligans at match time, and why one great speaker can make a conference memorable. Limbic resonance is what creates a “vibe” in crowds, tipping an ordinary moment into one we’ll remember.

Limbic resonance happens online too. When thousands of eagle-watchers gather around the Decorah Eagles nest cam, the feel-good sentiment around those fine feathered friends is contagious. Why else would 300 million otherwise reasonable people watch a live stream of eagles nesting?

Richard Medic is chief of happenings at Happeningo digital agency and founder of Soonfeed, the world’s first timeline and widget for scheduled happenings online.