The true story behind the Abbey Road “hooding”

Was it an abduction, a new internet craze or an ad for G-Star Raw?

Here’s the real story of what we did at the famous Abbey Road crossing in London. 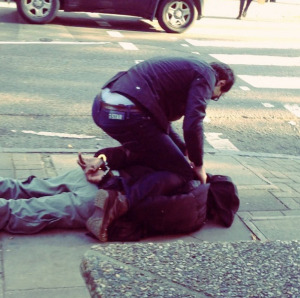 Traditionally, the month of Movember starts with a bang but ends with a whimper. For the first few days our social feeds are teased and tickled by bum-fluff moustaches and WTF-you-look-like-a-pornstar reactions. But by mid-month the novelty tends to taper, as do the donations and the awareness.

So we at Happeningo.com decided to skip the facial hair and create a Movember video for the endof the month. The video stars Nick “Smooth Deep” Semwogerere, the UK rapper behind Sarajevo Grade Moj.

Needless to say, if you’re a man and aren’t already informed about prostate cancer testing, now’s the time to check out Movember.com.

The backstory to this video begins at the start of the month, when I announced a Soonfeed happening at the Abbey Road crossing made famous by the Beatles. There’s a public webcam live streaming the crossing 24/7. While the Soonfeeders who were watching live knew it was a happening, the witnesses onsite had no idea.

And so what started out as an experiment in telling two stories around one happening evolved into a theatre of the absurd. Some thought the happening was a kidnapping or CIA rendition gone wrong. Others assumed that “hooding” was some kind of internet craze like “planking” or “owling”. And at least one sleuth concluded that this was an ad for G-Star Raw.

10 EUR for the handcuffs, courtesy Sarajevo’s only sex shop

10 EUR for the hood material and sowing, courtesy the old lady in Mostar Old Town