Have you ever wondered why the European Union’s audiovisual identity has no audio? I have. 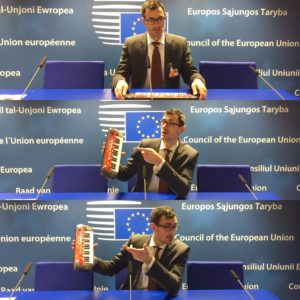 Since creating The Europe Song for the European Commission, I’ve been on a sonic quest. The idea is to help the EU develop an audio identity by the year 2022. That year marks 200 years since Beethoven started writing the tune now known as the the Anthem of Europe.

Here’s how brands like SNCF are using sound to build recognition, trust and positive sentiment. They’re already proving that sound is the EU’s most undervalued sensory communications tool.

Where’s the audio in EU communications?

Does anyone know if the EU institutions have ever produced a sound logo or any kind of audio branding? Asking for a friend. pic.twitter.com/PEiw2WYOwz

The Europe Song – a case study

I’ve been experimenting with audio communications using music from The Europe Song. I’d designed the song as an integrated 3-part “audio pool” of melodies, rhythms and textures that can be embedded into any EU communication product. (The music is free to use for non-commercial purposes. Contact me for the 60 audio stems).

Here are some of the early experiments. I’ll add more soon.

Before releasing The Europe Song to the public, we kicked off the story beforetime via Soonfeed. My old cassette recording of “Side A” served as a hook for both the backstory and the opening melody line:

My original 4-track cassette recording of the tune that eventually became #TheEuropeSong. Be there when it goes live https://t.co/whpmNZ7aIi pic.twitter.com/0K6d5hCcbr

The Europe Song was expertly trolled (mostly by the Dutch far right) as soon as it went live. So we created this earworm as a stock response to trolls who ignore all rational argument:

If you’re tweeting at #Europcom and a Eurosceptic trolls you, send them this clip from #TheEuropeSong so they can’t get the chorus out of their head. pic.twitter.com/sALQoS3bVU

When #EUSupergirl visited Brussels to gather support for her campaign to stop Brexit, we produced some teaser videos that featured the signature crescendo from The Europe Song:

IN ONE WEEK: Guess who’s coming to #Brussels, this time with 1000 letters from the UK?
Join the Facebook event: https://t.co/Wse9lfuO3l
Support the crowdfund: https://t.co/Ds0sKeNzRt#EUsupergirl @Letters2EU #StopBrexit pic.twitter.com/WJBq2wFu64

What is an “audio identity”?

It’s also known as audio branding, sound branding, sonic branding, acoustic branding, whatever you want to call it. An audio identity is more than just a sound logo at the end of a corporate video, a jingle on the radio or (in the EU’s case) a 200-year old anthem played at keynote events. It’s a holistic process that communicates the essence, values and promise of a brand within a multi-sensory branding strategy, and which typically includes some or all of the following elements:

Why does the EU need audio communication?

Good question! The short answer is that sound increases brand awareness, trust and positive sentiment. I think we can agree that the European Union needs some help in these areas.

If you’re looking for a longer answer, join me on Twitter and LinkedIn for updates as this live blog unfolds. Or, even better, let’s talk.